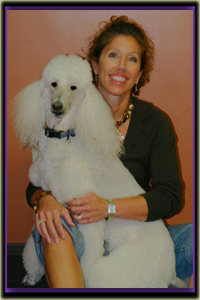 Dr. Garman has a special interest in ultrasound and has been performing cardiac and abdominal ultrasounds since 2000. She also enjoys internal medicine and soft tissue surgery, along with her ferret patients and their unique challenges. She is a member of the AVMA, IVMA and LCVMA, in addition to being a member of the Ethics Committee for the IVMA.

Dr. Garman is a 1985 graduate of Cedar Rapids Kennedy High School. Her family life is spent on an acreage with her husband, Bob, and their three children. Her animals: Arthur Louis, a Llewellyn Setter, cats Sun and Denis, and a guinea pig, “Squirrel,” round out the family. She enjoys the beach, water sports, and entertaining with her family and friends. 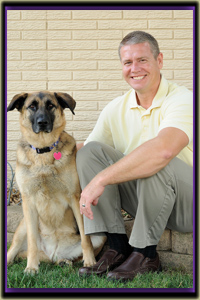 Dr. Greg Winterowd is a native of Linn County and a second generation veterinarian. After graduating from Springville High School, Dr. Winterowd received his BSS in Biology and Chemistry from Cornell College in Mount Vernon, Iowa. He received his DVM from Iowa State University in 1994. Dr. Winterowd worked with his father, Darrell, in Cedar Rapids from 1994-2000. In 2000, Dr. Winterowd joined Linn Animal Hospital and later became a partner. Dr. Winterowd is a member of the AVMA, IVMA, and past president of the LCVMA.

Dr. Winterowd has always been focused on small animal medicine. He enjoys orthopedic and soft tissue surgery. Dr. Winterowd’s motto is, “We’re here to prevent and solve problems. If our team can’t, then we will get you in front of whom we feel has the best qualifications to do so.” He is rarely seen without his 2 dogs at work.

Dr. Winterowd and his wife live on a small cow-calf farm with a dozen or so black angus cattle, and a handful of barn cats. Much of Dr. Winterowd’s spare time is taken up with watching his 2 daughters in their activities. He enjoys his trips to Wyoming, construction, and racquetball.

Dr. Jill Johnson received her DVM in 1994 from Texas A&M University and joined a large animal practice in Houston. She moved back to Iowa in 2002 and joined Linn Animal Hospital in 2006.

Dr. Johnson’s special interests are internal medicine and soft tissue surgery. A certified veterinary chiropractor and graduate of The Healing Oasis Wellness Center Veterinary Spinal Manipulative Therapy program, she uses spinal adjustment as a complimentary modality in the treatment of neck and back problems. She is a member of the AVMA, IVMA, LCVMA and a Fellow in the College of Animal Chiropractors.

Dr Johnson graduated from Cedar Rapids Prairie High School in 1980. She lives in Marion with her husband Michael and Astro their adopted dog. She enjoys hiking, showshoeing, gardening, running, biking, fishing and competitive nosework with her dog.

What Our Clients Say

They are so caring and thoughtful. My Rylie is healing up very well and they were able to remove her cancer so she can stay with us for a while longer. Can’t thank them enough

Anyone who has a pet, animal, or a service knows how important, and close, our animals can be to us. And Park Towne understands that. The care I've received over the last month for my dog Dizzy has been above and beyond by their entire staff. Both me and Dizzy are thankful :)

Very nice staff and Doctors. They are great about getting you in in a timely manner. Or if something happens very close to closing the stayed open to see my kiddo. I'm always happy when I leave.

This is a really nice and affordable place to bring your pet. The environment is very low key and relaxed. It makes your pets feel like they are in a home and not at a clinic.

Schedule An Appointment at a Location Near You!